The number of homes currently for sale in the UK has fallen to a record low and, as a result, house prices are expected to spike upwards once more.

House prices are already hitting record levels, but future price forecasts predict this may just be the start: house prices could rise by as much as a quarter in the next five years. 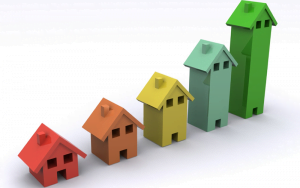 During the customary pre-election uncertainty, the property market, as with a plethora of other markets, slows as sellers and buyers alike hold off on doing business until after the election is decided.

With a comprehensive victory for the Conservatives, the usual trend would be for the housing market to ‘bounce-back’ as business activity returns to normal, non-election levels. However, in reality there has been no ‘bounce back’ and the market continues to stagnate amidst a serious supply-side shortage.

Industry commentators and experts have blamed the shortage on, amongst other things, Britain’s ageing homeowners refraining from downsizing and thus releasing family-sized homes onto the market. The issue, however, is more complex than simply blaming one sector of society, and although the older generation do tend to live in larger houses than their younger counterparts, there is a serious lack of suitable housing for the retired and elderly to downsize to.

The main focus of the housing crisis has been the plight of the first time buyer. The struggle of transitioning from the rental sector to ownership is, of course, an important issue that needs to be tackled. However, the first time buyers remain just a cog in a larger wheel of interlinking problems and dilemmas. The last time buyers – those homeowners who are looking to buy their last, usually smaller, property – are being ignored by the media and government, resulting in the exacerbation of the housing crisis for both the young and the old.

Demos, a leading cross-party think-tank, have claimed that only 2% of the UK’s housing stock is retirement property. What’s more, said property only houses a tiny 1% of Britons in their 60s (the USA’s retirement housing stock houses around 17%). Legal & General have stated that, ‘the UK suffers from a chronic undersupply of age-specific housing’, and believe that it will take a mix of government support, tax relief and revolutionary thinking to get the UK out of the mire of the current housing crisis.

The ‘Last Time Buyers’, a report published by Legal & General, stated that despite 32% of homeowners aged over 55 who considered downsizing in the last 5 years, only 7% actually did so. Of those who did not downsize, ‘a lack of suitable housing’ was stated to be the top reason they refrained.

Great service and highly recommend. Very clear and prompt information, very easy and pleasant to deal with (Barry) , would recommend to others on my experience