Following our Great Retirees research, Bower can reveal that the majority of UK retirees never take a break during their working life.

Just over half (50.7%) of retirees surveyed said they did not take any ‘career breaks’ whatsoever (see figure 1).  With our retirees providing thousands of man hours and thousands of pounds in taxes throughout their lives, and most never taking a single break, we should work just as hard to ensure that they have the retirement they deserve.

The income stops, but the work does not 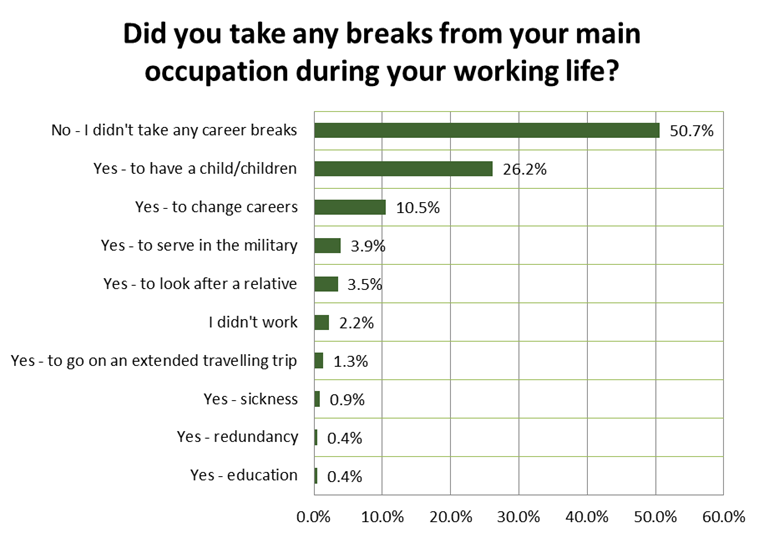 Even after retirement, many of our retirees continue to contribute to society via unpaid voluntary work in their community or similar work for a local charity. The Great Retirees research found that 1 in 5 regularly volunteer for a charity, while a further fifth engage in fundraising or voluntary work for their community.  Just under a third (29%) undertake other unpaid work, like looking after grandchildren or caring for a loved one. On average, our retirees provide 7 hours a week in unpaid work.

This altruistic effort is at the bedrock of a healthy society, and our Great Retirees are part of the glue that keeps our communities together.

“Even after retirement, working doesn’t stop. Many pensioners volunteer for their local community or a charity close to their heart. Not only this, taking on unpaid labour also allows them to continue learning new skills, and provides opportunities to make new friends. Actively engaging pensioners in the community should be encouraged as a result. Not only is their unpaid work of great value, but building a sense of community can have a tangible effect on their happiness.”

Andrew Card from Bower quickly found a really good deal for me, reducing the equity release deal percentage from 6.4% to 2.71% making a massive saving over a very few years. I will certainly recommend Bower and Andrew to any of my friends and colleagues who are considering releasing equity from their properties.