Living Longer
in the UK

The UK’s population is getting older. The average age in this country reached 40 for the first time last year: our country is now middle-aged. One of the contributing factors to this is that the average citizen is now living a lot longer than they did in the past. 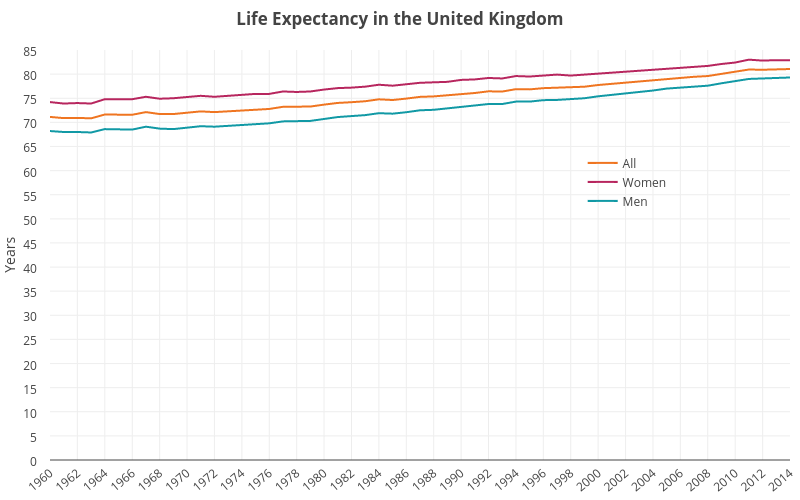 Since 1960, the average life expectancy has risen by ten whole years. When split out by sex, men can today expect to live for an extra eleven years, while women have gained an extra eight. The gap between the sexes has shrunk too, with women outliving men by 3.6 years in 2014 compared to the 6 years they did in 1960.

Those aged 65+ have been benefiting from this change. Since 1960, men aged 65+ can expect to live an extra 6.9 years, while women get an extra 6.2. There’s a lot you can pack into those extra years. 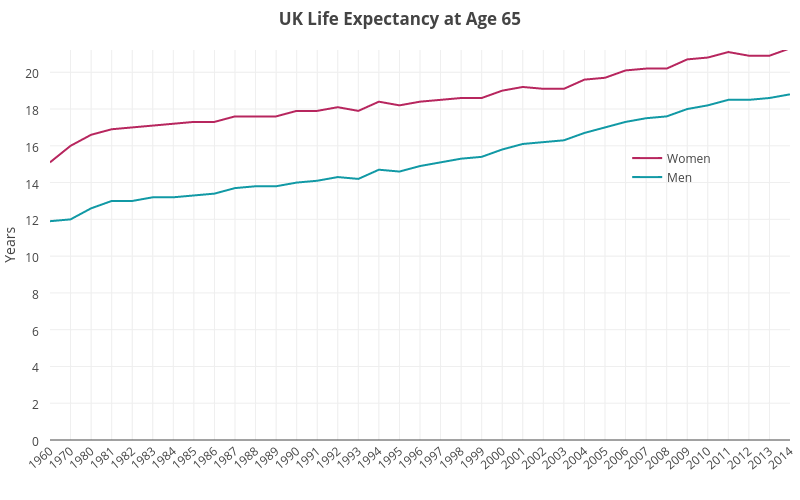 But most incredible of all is the number of the Very Old (the Office of National Statistics’ words, not ours). Since 2002, the number of people living beyond 90 has been rising. In 2014, the Queen had to send out 780 birthday cards just to those older than 105. 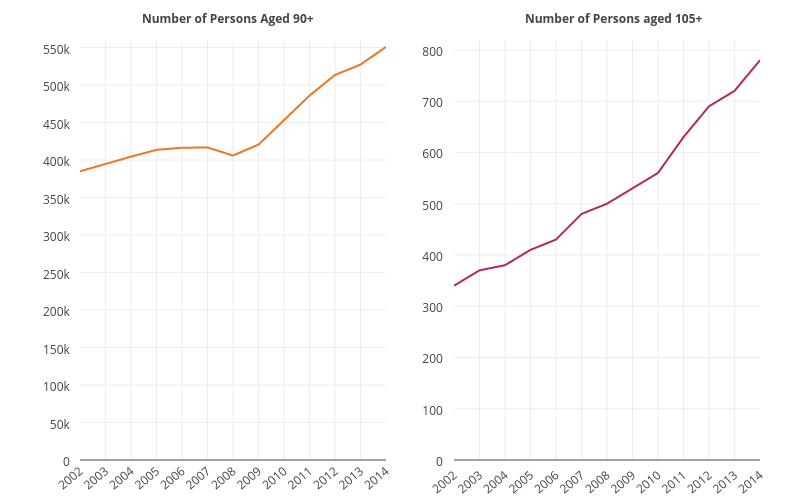 This goes some way to explain why the retirement age is rising – state pensions are simply getting more and more expensive. But it also means that we get more time than we used to, something we can all appreciate.

The question remains though, why are we living longer than ever?

Health of the Nation

It can be very hard to gauge the current state of the UK’s health. With constant worries about obesity, cancer, and whatever the latest health worry is – be it swine flu or deep vein thrombosis – it can be easy to take a dim view.

With such a vast subject the picture is obviously mixed, but there are very important areas where we are seeing incredible improvements. With the relatively new NHS looking after us from cradle to grave, changes in our lifestyles and diets, and frankly miraculous medical advances, the future is looking brighter than it ever has before.

Let’s take cancer to start with. This group of diseases is something we all fear and there are few of us who haven’t had a friend or family member affected by it. It’s no surprise the cancer charity MacMillan raised £229m in 2015. The good news is that all the hard work of healthcare professionals and scientists has started to put cancer on the back foot. 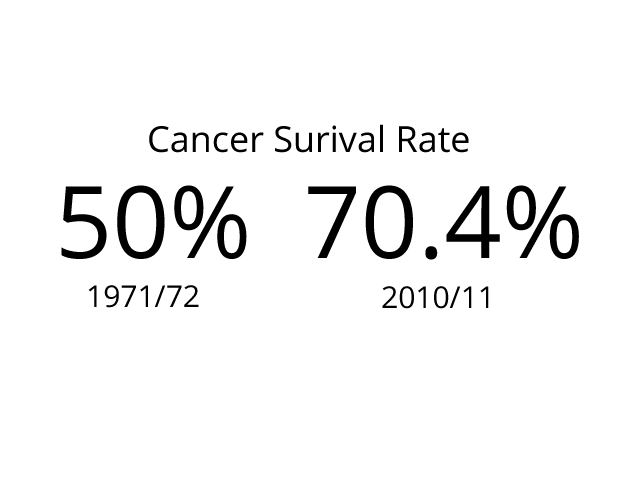 Over the last 40 years, there have been massive improvements in the survival rate for those affected by cancer. For example, if you were diagnosed with prostate cancer in 1971/72, the survival rate was 25%. Now, 84% will live to see at least another ten years.

This is particularly important as cancer is one of the main causes of death for people in the UK. In 2015, it was responsible for 29% of all registered deaths in England and Wales. Anything that helps to lower this percentage will, of course, allow many thousands of people to enjoy a longer life every year.

The second biggest cause of death was circulatory disease which caused 27% of deaths. This includes things like strokes and heart disease, but this is an area we’ve seen improvements in too.

According to the British Heart Foundation (BHF), cardiovascular diseases were responsible for 48% of male deaths, and 55% of female deaths in 1961. Come 2009 and the percentages are 33% for both men and women. That’s a huge and drastic change. The mortality rate for these conditions has been decimated over the years. 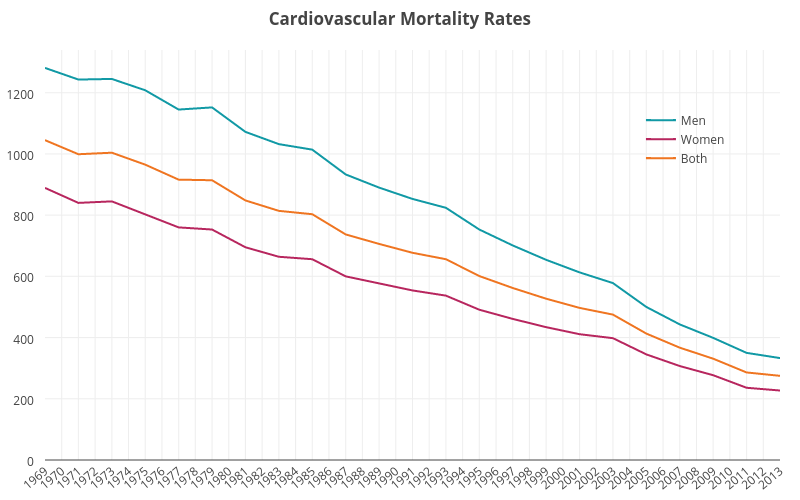 These two examples go to show just how far along we have come in the fight against illnesses and conditions that we previously had little hope of surviving. This all goes without mentioning infectious diseases like smallpox and polio being eradicated.

A big part of this is medical advancements and access to top quality healthcare for all, but there’s another side to it: our own actions and choices.

We are more concerned and aware of our health than we’ve ever been before. You can’t find a supermarket that doesn’t sell a bunch of low fat, low salt, or low sugar foods nowadays. We count calories and carbohydrates and try to ensure we’re eating well.

At least that’s how it feels at the moment. But how have our diets really changed over the years? According to this tool created using data from the Department for Environment, Food and Rural Affairs, there’s been a lot of big changes since 1974.

It’s fair to say this is a pretty mixed bag when it comes to what we consider ‘healthy’ foods. You can see the biggest drop of them all was in sugar and preserves, but on the other side confectionery, alcoholic drinks, and soft drinks have all been on the rise. Having said that, we are eating more fruit and vegetable than we did before.

So what’s actually happening with our diet? 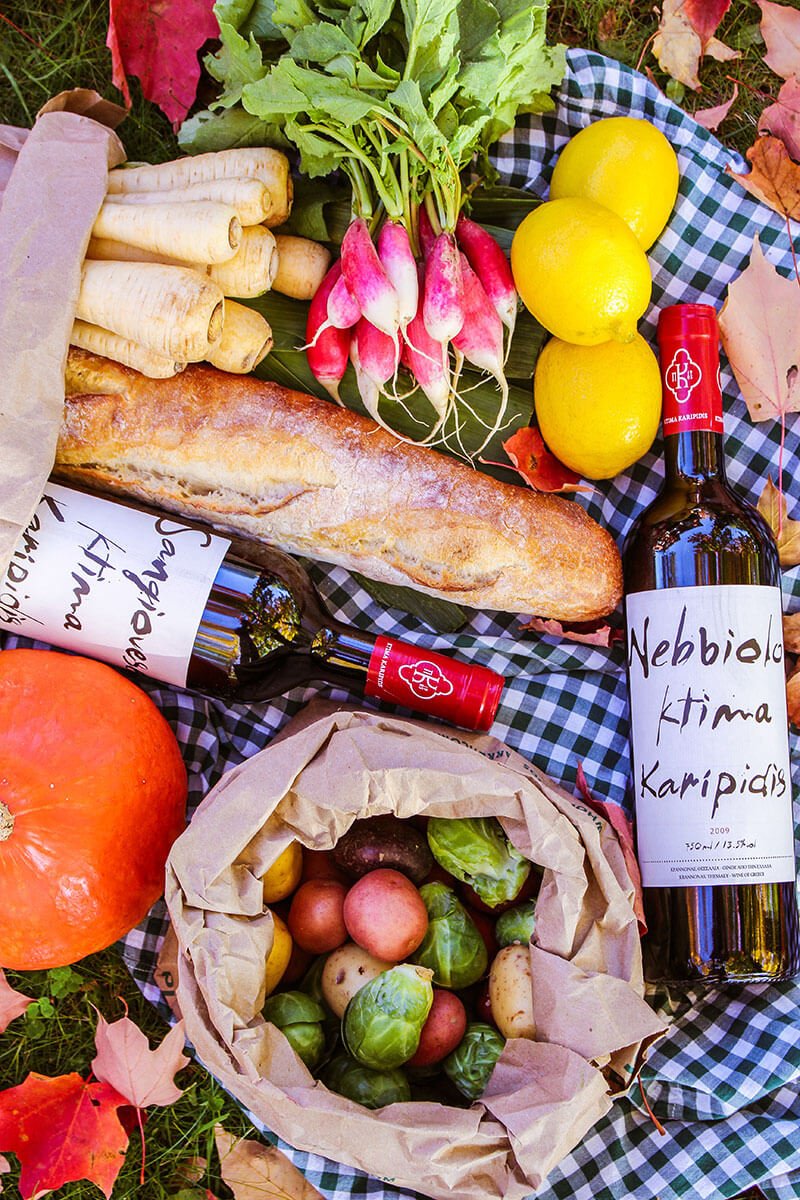 On the surface, rising obesity levels – back in 2013 a report from the Academy of Medical Royal Colleges suggested the UK was now the “fat man of Europe” – suggests we’re much greedier eaters than we were in the past.

In the latest data from Public Health England, the UK is placed 8th for prevalence of obesity out of the 34 OECD countries. This has been 30 years in the making with our obesity rate rising by 72% since 1980. In comparison, while the US still has a higher rate overall, theirs has only risen by 46% in the same time.

There’s certainly changes associated with poor diets surfacing in terms of illness as well. An analysis of NHS data by EXASOL found the amount of type 2 diabetes medication being prescribed had risen by a third in just five years.

By 2050, Public Health England believe obesity will affect 60% of the population. If that comes to be, then the negative effects of obesity and associated health issues could see our life expectancy begin to decrease.

But why is this happening now?

We spoke to Nichola Whitehead, a UK Specialist Registered Dietitian who has worked with the likes of Holland & Barrett and Alpro. She places some of the blame on the cost and availability of sugary foods.

"We’re consuming more sugar than previous generations as it’s both cheaper and more widely available than ever before. Look at the ends of most supermarket aisles and you’ll see offer after offer on highly processed, brightly packaged ‘junk foods’ that are loaded with sugar."

With the 2008 financial crisis hitting people's wallets pretty hard, it may explain why we're seeing obesity rising over the last few years. The thing is we love the stuff, but it has pretty much no nutritional value, as Nichola explained:

"Sugar, in addition to providing next to no nutrients, also isn’t very filling, meaning that it’s easy to eat an excess of. I think it’s a combination of all of these factors that is driving our sugar intake; wide availability, taste, convenience, cheapness and health issues which don’t manifest overnight such as obesity which is a leading risk factor for type 2 diabetes.”

In the end though, obesity and ill health are not just down to food. What we do with a spare time plays its own significant role.

Alcohol is a big part of the UK and its culture. This won’t come as much of a surprise. From weekly trips down the pub to a sherry at Christmas, a true teetotaller is hard to find within these shores. But when it comes to the data, we can see the levels of alcohol we consume are quite erratic. 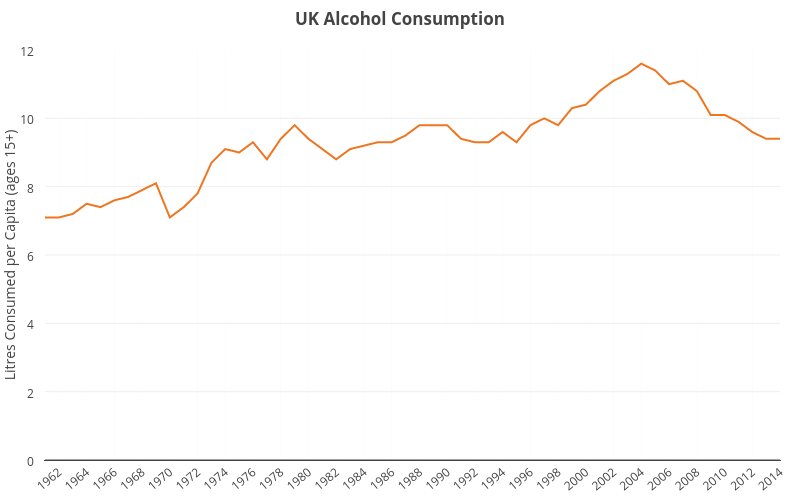 Looking back as far as 1961, it’s seems like the country has a hangover from its alcoholic peak of 2004. Nevertheless, we’re back to 1995 levels now suggesting the last decade or so has got us rethinking just how much booze we want to consume.

This seems to be reflected in alcohol related death rates too. These reached a recent peak in 2008 before dropping consistently until 2012 when they steadied for a year and then saw a rise in 2014.

Meanwhile, cigarettes have been falling out of fashion as well. The number of smokers in the country has been decreasing drastically since the 70s, going from over 45% of the country smoking to just 19%. At the same time, e-cigarettes are gaining in popularity as people turn to what they see as an alternative without the health dangers. 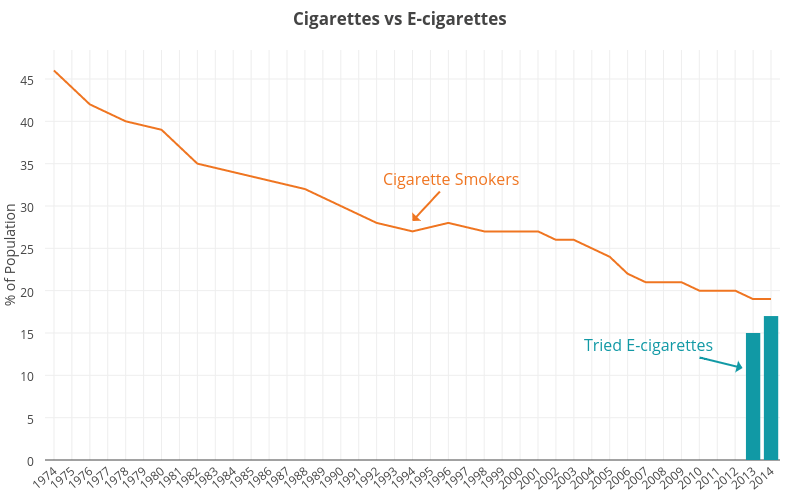 So we’re smoking less and we seem to be lowering our alcohol intake, but what about efforts to make ourselves healthier? Are we taking better care of ourselves these days?

It certainly seems like everyone and their dog are doing yoga or walking around with a Fitbit on their wrist, but let’s take a look at the data. For a start, the ‘fitness’ industry is certainly on the rise. According to Simply Business, the number of gyms, fitness instructors, and personal trainers are all on up, which suggests the demand for them is too.

But we’ve already established that obesity is on the rise, so what’s going on? If exercise is more popular, why aren’t we seeing obesity begin to fall? The answer may lie in the British Heart Foundation’s Physical Activity Statistics 2015 report.

What it gets to the crux of quite quickly is that many of us live sedentary lives now, where we sit in an office for most of the day and then go home and sit some more. The problem with this is that getting a fair bit of exercise in around that won’t stop the damage. This may explain the UK’s combination of both increasing gyms and waistlines.

In 2012, 54% of women and 59% of men spent five hours or more of their work day either standing or sitting. If you’re sitting, the BHF calls that sedentary behaviour which increases the risk of diabetes, cardiovascular disease, and death from all causes. It's not just at work either. 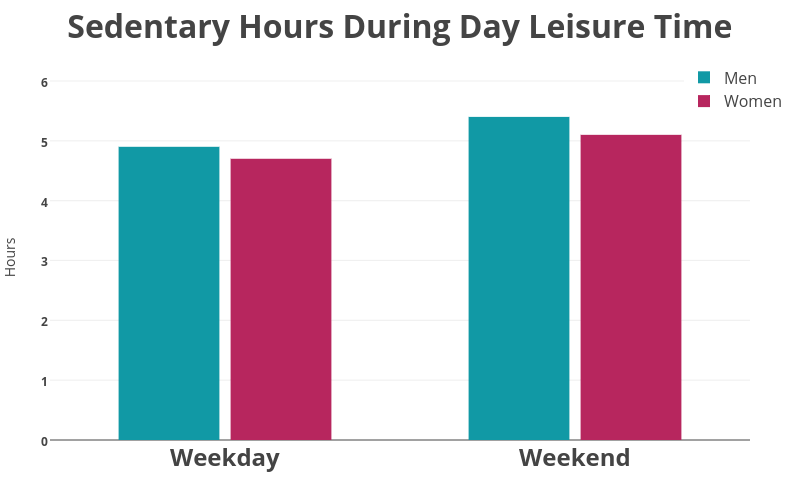 That chart means that over half of the population spends 10 hours just sitting or standing every single day. This is incredibly unhealthy and helps give us extra insight into why diabetes and obesity is on the rise. It could also begin to reverse the progress made on battling cardiovascular disease.

At the same time health technology is improving, while the threat of cancer diminishes each year. Thanks to the tireless work of doctors we're a lot tougher than we used to be.

What we can see for certain is that the average person has more time to spend in their lifetime now. Sure we may have to work for longer, but thanks to an increased level of health we're able to be more physical at a later age.

Of course having said that, our sedentary lifestyles may sneak up on us. Let's hope all those people buoying the gym industry at the moment are making sure they actually turn up.

As always there are things to worry about it, but looking forward there's plenty to see that's positive. What you need to do is simply take advantage of it.

This article was researched and written by Bower Retirement, a specialist in retirement lending. 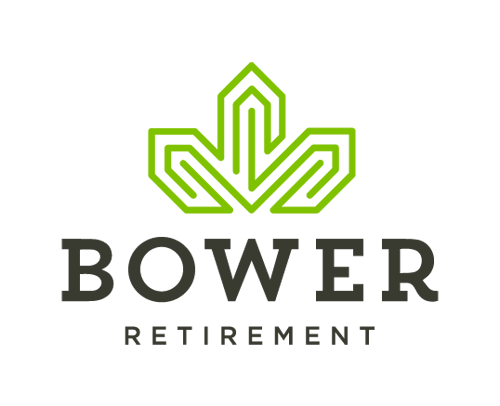