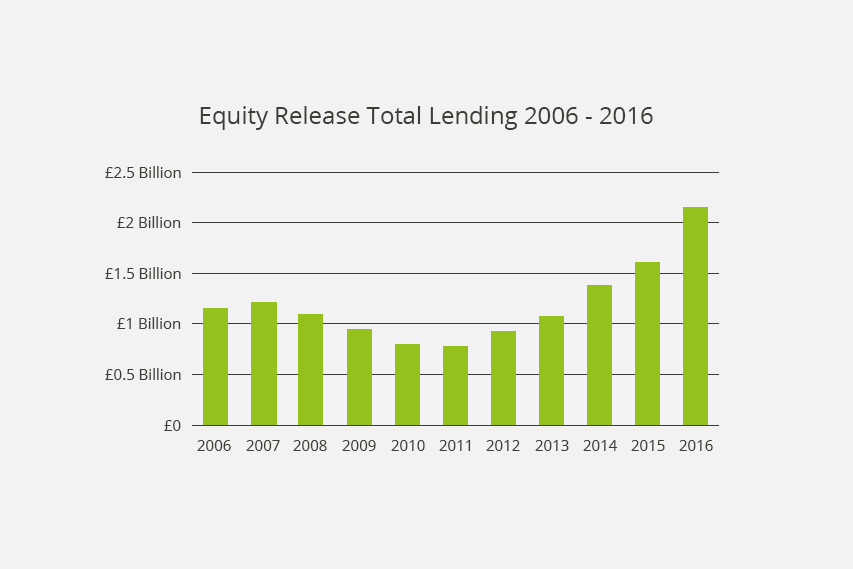 Published on 13 February 2017 by The Bower Team

Equity release sales continued to soar in 2016, with total lending in 2016 surpassing the £2 billion mark for the first time.

New records have been broken in the equity release industry with later life homeowners unlocking £2.15 billion* from their homes in 2016. That’s double the amount released just three years ago.

The figures, released by the Equity Release Council, has put equity release in the news once again as journalists and industry commentators consider the record breaking figures and rapid surge in sales.

So why is equity release growing at such a fast pace?

A number of reasons have been put forward for the rising popularity of equity release, but none quite as much as the interest-only time bomb.

Many homeowners in or approaching retirement are finding themselves caught between a rock and a hard place as their interest-only mortgages come to an end.

Being faced with a debt of potentially tens of thousands of pounds to pay at the end of a mortgage term is the reality being faced by almost 1 million people in the UK.

Citizens Advice published its own research in 2015, estimating that 934,000 people have an interest-only mortgage – and no plan in place as to how they will pay the debt off at the end of the term.

According to the research, the average estimated shortfall is £71,000. Interesting then, that the average amount unlocked by Bower customers in 2016 was £67,735.

“We were in a desperate situation”

Mr & Mrs Humphreys, from Essex, are one couple who turned to equity release in 2016 to escape the burden of their interest-only mortgage.

Like many others before them, they spoke to their mortgage provider when the term of their mortgage was due to expire, only to be refused a new deal.

The couple faced the prospect of having to sell their much-loved home so that they could pay off the mortgage.

Our house is a two-bedroom property, so downsizing wasn’t an option. We considered moving to a cheaper area – but I have lived in this area of Essex for 74 years and it broke my heart even thinking about moving.

The stress of potentially losing their home soon took its toll. Mr Humphreys fell into depression and Mrs Humphreys suffered a heart attack.

Almost a year after arranging their equity release plan, the couple are free from the stress they previously experienced, and are able to enjoy their retirement.

Equity release has changed our lives in every way. We have a bigger disposable income each month, our home is secure and ours for life, even our day-to-day lives have improved in terms of us being able to afford to buy healthier food.

I would recommend Bower to absolutely anyone considering equity release. It isn’t a decision to be rushed into, and our adviser gave us all the time we needed to understand everything. We’re go grateful for their help, I don’t know how we would have coped otherwise.

If you are thinking about using some of the tax-free money from your home to boost your retirement finances, then seeking specialist advice is vital to make an informed decision.

With our help, you can fully understand all the benefits and drawbacks of equity release, including, for example, how a plan will reduce the amount of inheritance you leave.

Speak to us today to arrange your free, no-obligation initial consultation on [tel].